The order for suspension of its activities for 30 days of the Tunisian association Shams-Pour la dépénalisation de l’homosexualité en Tunisie marks a very dangerous event in the history of the democratic and liberal Tunisia. The reasons behind the order are very vague: the vice president of the association Hedi Sahly, who has taken refuge in Brussels after having received death threats for his role within the group, has told the local media that the main reason for the temporary suspension of all Shams’ activities is that it doesn’t respect the principles of the rule of law. What one means by “no respect for the rule of law” is not very clear. What is certain, however, is that the first, and until now the only Tunisian LGBT organization formally recognized by the government on 18th May 2015, needs to suspend its fight.

In recent months, Shams has stood out because of its behaviour in defence of some citizens who had been convicted by the Tunisian courts to three years imprisonment for the crime of sodomy, and since its formation it has been fighting for the abolition of Article 230 of the Tunisian Criminal Code that, in fact, condemns homosexuality.

Shams is not alone in claiming full rights and freedoms for the LGBT population: to help it in this battle of civilization is the organization “Without Restrictions“, founded by a young Tunisian man who made activism part of his daily routine. Ramy Ayari is fighting daily to be given the right to be himself in a society that, instead, wants to muzzle its homosexual citizens. BOSSY contacted him and he has once again decided to stand up and, in this exclusive interview, Ramy speaks out about the extremely difficult condition of homosexuals in his country: Tunisia still has a long way to go to become the democratic state that it already thinks it is. 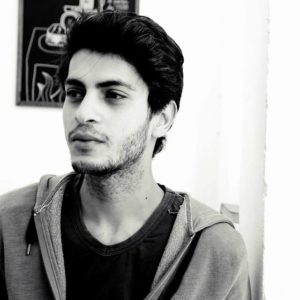 N. Hello Ramy, first of all thank you very much for accepting my interview. Could you please tell us a little bit about yourself? When did you realize you are gay and how did you come out?

R. I’m Ramy Ayari, I’m 22 years old and I’m a computer sciences student. I realized I was gay at the age of 15. I advocated in favour of homosexuals for 2 years and then became independent in 2014 and founded the association Without Restrictions.

N. How do you feel as a young and openly gay man living in Tunisia?

R. Frankly, I feel good, I’m proud of myself because I’m absolutely not afraid of anyone; I know how to manage my life, as well as the danger I encounter daily. The only time I didn’t feel good was when my family didn’t support me and rejected me because I’m gay, but this doesn’t mean that all gays live like me.

N. Tunisia’s revolution began five years ago on 17th December 2010, when Mohamed Bouazizi, a poor street vendor, set himself on fire in protest against the humiliation and harassment he endured from a government officer in his hometown. Tunisia remains, in the views of many political analysts, the country where the outcome of revolution has been most positive. But the ascension to power of Ennahda, an Islamist party affiliated with the transnational Muslim Brotherhood movement worried many Tunisian homosexuals. What is the current status quo of the Tunisian gay community five years later the Revolution?

R. Actually the current situation has been the same for many years: LGBT people cannot live their lives as everyone else; in case of aggression or sexual harassment, or even rape, they cannot complain because there is an article that criminalizes their sexual orientations and they may be imprisoned. But now it’s clear what the reality that has been hidden for years really is because the media talks about it after the birth of a number of LGBT associations, which are trying to do their best to show what the state’s position is towards members of the LGBT community, who are being imprisoned because they are different from the majority. At the time of Ben Ali there were several arrests and assaults but nobody talked about it because they were afraid. It is the same thing during the era of Enahdha: people were afraid of the Islamists, even the ones who had the courage to express themselves, as they were threatened to death and were forced to leave Tunisia to carry on their activism elsewhere; this is the case, for example, for Hedy Sahly, the vice-president of Shams.

N. Being gay in Tunisia is technically and legally forbidden. According to Article 230 of the 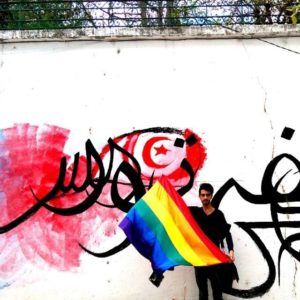 Tunisian Penal Code, the crime of “sodomy” (what a horrible word!) is punishable – and punished – with imprisonment of up to three years. Last December six gay university students were imprisoned for three years and banished from their hometown on account of their sexual orientation. Have you ever had any serious problems for being gay? Have you ever been a victim of discrimination for your sexual orientation?

R. I was threatened by the police and by the people themselves after publishing some photos of me kissing a guy in a public place, which went viral in Tunisia, and I could not even bring charges against people who were threatening me. I was fired from coffee shops because I am gay; there are even people who refused that I would work for them because I am gay and they would say that they “don’t want gays working for us”.

N. What is the role that Islam plays in condemning the homosexuals in Tunisia? Do you think that the problem is of a religious nature or what else?

N. You are a young LGBT activist: how difficult, rewarding, and uplifting is it being a civil rights activist for gay rights in Tunisia?

R. Of course it’s difficult to advocate for the LGBT cause because I’m facing a Muslim Arab, and especially conservative, society; a society that knows almost nothing about freedom and tries to exclude us because it has spent more than 20 years under a dictatorship and therefore there are difficulties in changing its mentality and ways of thinking, to try to make it understand that homosexuality is not a disease and it’s not imported from abroad, and that homosexuality has always existed and that this difference must be accepted even if it doesn’t please us.

N. How do you think that gay rights activists can propel the discussion of gay issues in Tunisia, and what, in your opinion, is the best way to get Tunisians to accept the gay community?

R. It is necessary for the LGBT community to be more visible and to forget the fear of being discarded. We need to begin to organize ourselves to go to the streets to manifest simultaneously. We need to work with all human rights organizations to have more solidarity and support, and we also need to work on raising awareness because it is truly shameful that in 2016 we are still at the point of discussing whether homosexuality is a disease or not.

N. What about the decision of the Tunisian government to suspend the activities of the LGBT organization Shams-Pour la dépénalisation de l’homosexualité en Tunisie?

R. I think that what the court decided is very terrifying and shocking! This greatly threatens the foundations of human rights, which are the rights to freedom of expression.
Even more shocking, the decision mentioned above is very implicit and vague, allowing a multitude of possible interpretations. This kind of practice is very dangerous: it’s necessary that civil society doesn’t keep silent because it will put all associations in danger; today there is Shams, tomorrow we do not know who will be next. This is a politically influential decision, it’s a violation of the freedom and rights of associations. 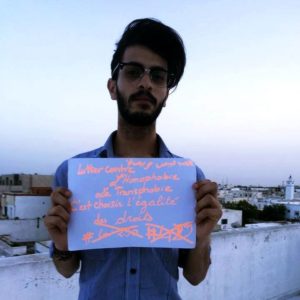 N. You are the founder and the president of a partner organization of Shams, called Without Restrictions: tell us more about your initiative, your manifesto and your projects

R. In our association we aim at the decriminalization of homosexuality in Tunisia and the abolition of Article 230 and 226 that puts transvestites in prison because their look is considered to be an offence at modesty. We are working on the LGBT community, through training on human rights and awareness, and encouraging LGBT people to advocate for their rights. At the same time, we are launching international campaigns to denounce violations against LGBT people; we launched a campaign 17 May 2015 in the form of graffiti on the walls of the buildings that represent the authority (police stations, el Kasbah).

N. What are the challenges that the Tunisian civil society have to face and overpass in the near future?

R. The challenge facing our society is the security: people prefer the political security more than freedom by intimidation guided by our government, also by the Islam of Daesh and the Muslim Brotherhood who want to impose this on our society and blur the line between whether Tunisia is a civil state or an Islamic state.

N. What advice do you have for young and budding gay rights activists in Tunisia who, just like you, want to change the climate of hostility against homosexuals in your country?

R. Never lower your head towards the continuing struggle, whether it’s from inside or from outside Tunisia; we must be more united than ever, and all my respect and my solidarity is with the LGBT people who left Tunisia and who will be able to keep their head up high the day they will return to Tunisia. 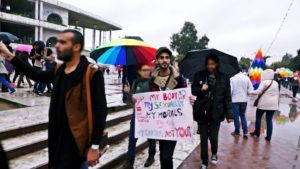